Solving Inequalities in One Variable

Are you ready to dive into our solving inequalities unit? Let's do a very quick review of inequality basics that you probably first learned about in second grade.

Always remember that inequalities do not have just one solution. There are always multiple solutions! Think about the following inequality:

We could go on forever, so as you can see there are many many solutions to this inequality!

Let's take a look at the inequality symbols and their meanings again. 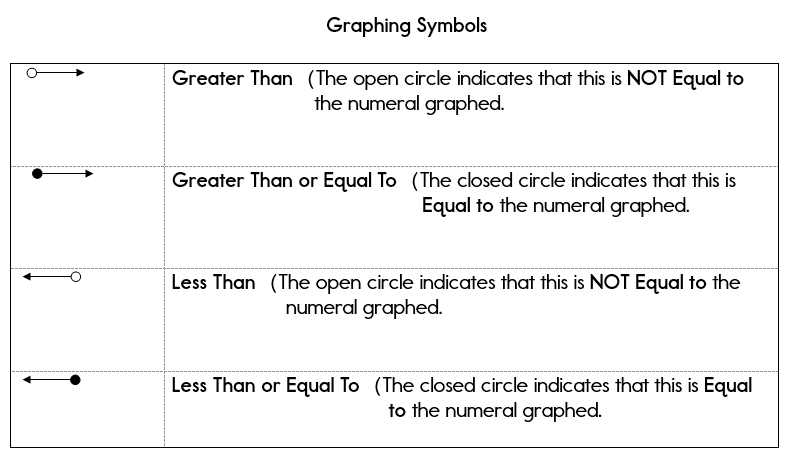 When you graph inequalities that have only one variable, we use a number line. We will use open and closed circles and arrows pointing to the left or right to graph our answers.

An open circle on the graph indicates less than (<) or greater than (>).

Take a look at the models below.

x is greater than 5. I use an open circle on 5, since x is NOT equal to 5. Then I draw an arrow to the right to indicate that x can be any number greater than 5.

x is less than OR equal to 10. I use a closed circle on 10 since x is also equal to 10. Then draw an arrow to the left to indicate that x can be any number less than 10.

Ok... enough review. Let's solve a few inequalities. You are going to solve inequalities using the exact same rules that you used when solving equations. Let's quickly review those rules: 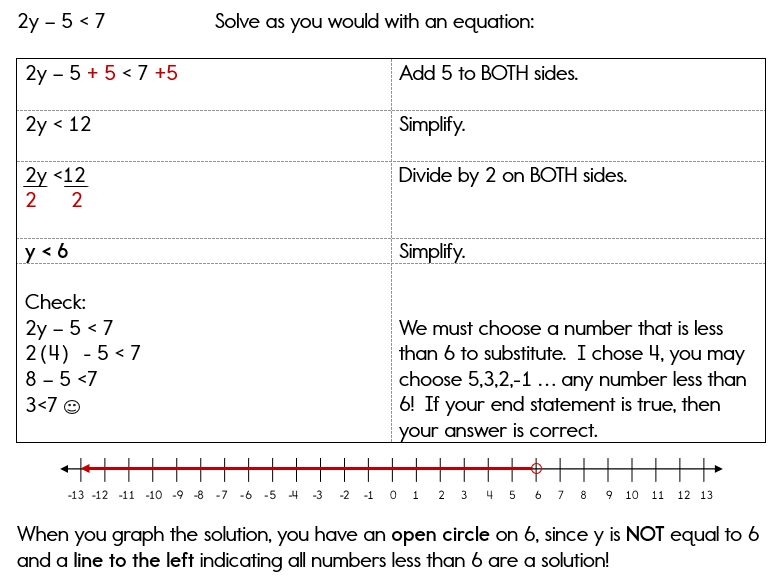 Did you notice that you took the exact same steps that you would've taken in order to solve a regular equation? The only difference was that you had a less than sign instead of an equal sign.

Now that was pretty easy!

The next example is similar to example 1, but I would like to show you how to reverse your answer to make it easier to read and graph. Don't be afraid to do this if your variable ends up the right hand side of the inequality. 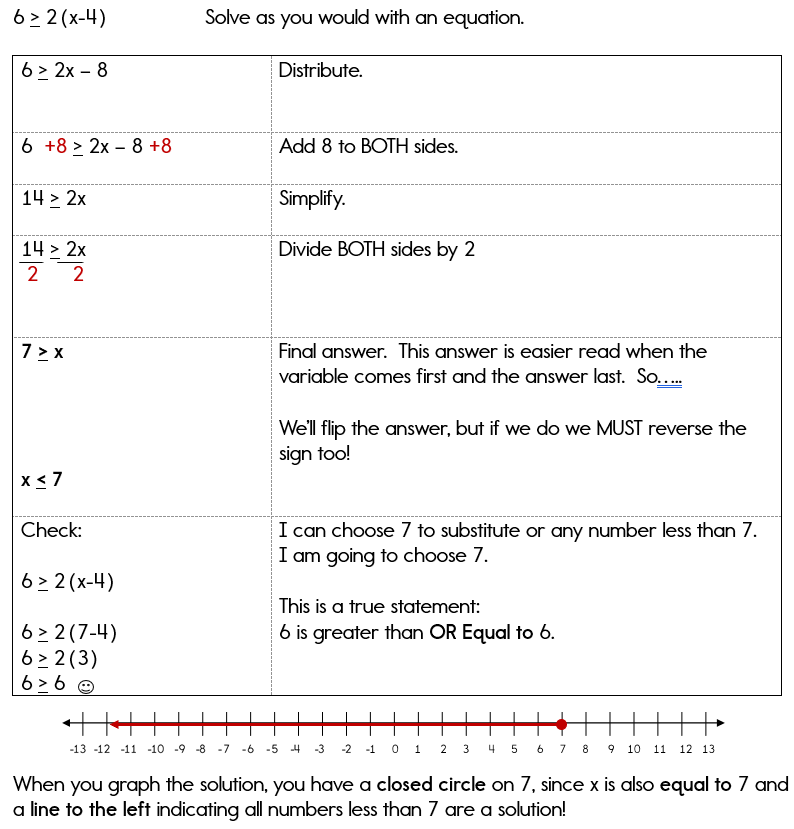 Ok... The first two examples should have been pretty easy since you are a superstar at solving equations. Luckily there's only one trick that you have to remember when solving inequalities and that is:

Whenever you multiply or divide by a negative number, you must reverse the sign!

I knew you were going to ask "Why?" And.... you should be asking why. It's important to understand these rules. Sometimes, the best explanations are through examples. Let's take a look.

**I know that I can keep my inequality balanced by multiplying or dividing every term by the same number, so.... let's multiply every term by -1.

No, -3 is greater than -5, so in order to make it a true statement, we must reverse the sign.

Our next example revisits how to solve equations and/or inequalities with variables on both sides.

Example 3: Variables on Both Sides and Dividing By a Negative Number

Let's take a look at how our new rule applies to solving equations. Pay special attention to the part where we divide by negative 1. 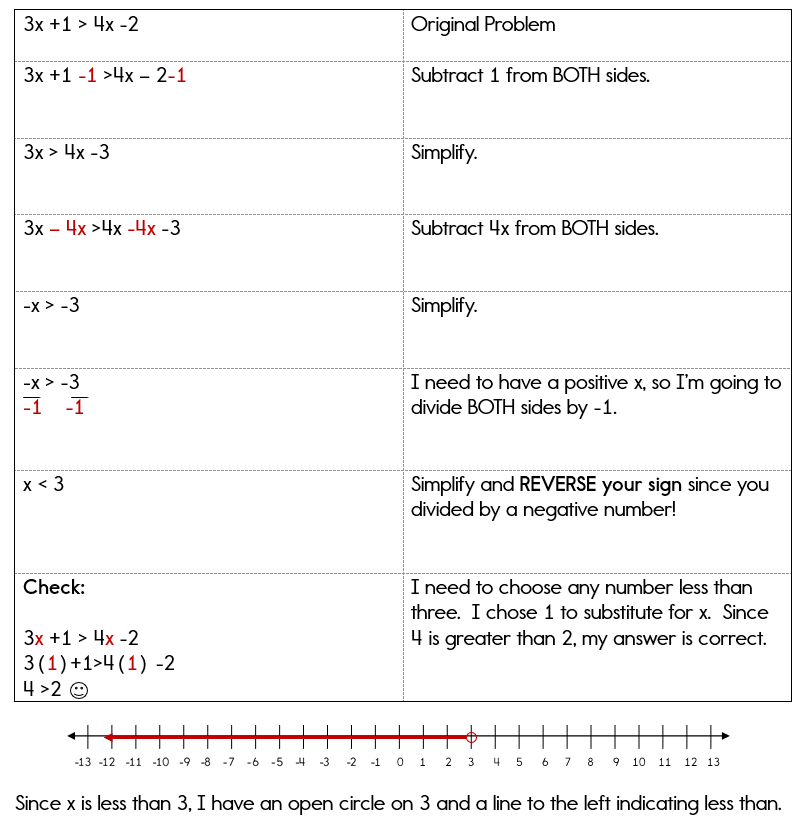 Our last example revisits how to solve equations and/or inequalities with fractions. I hope you remember the trick. 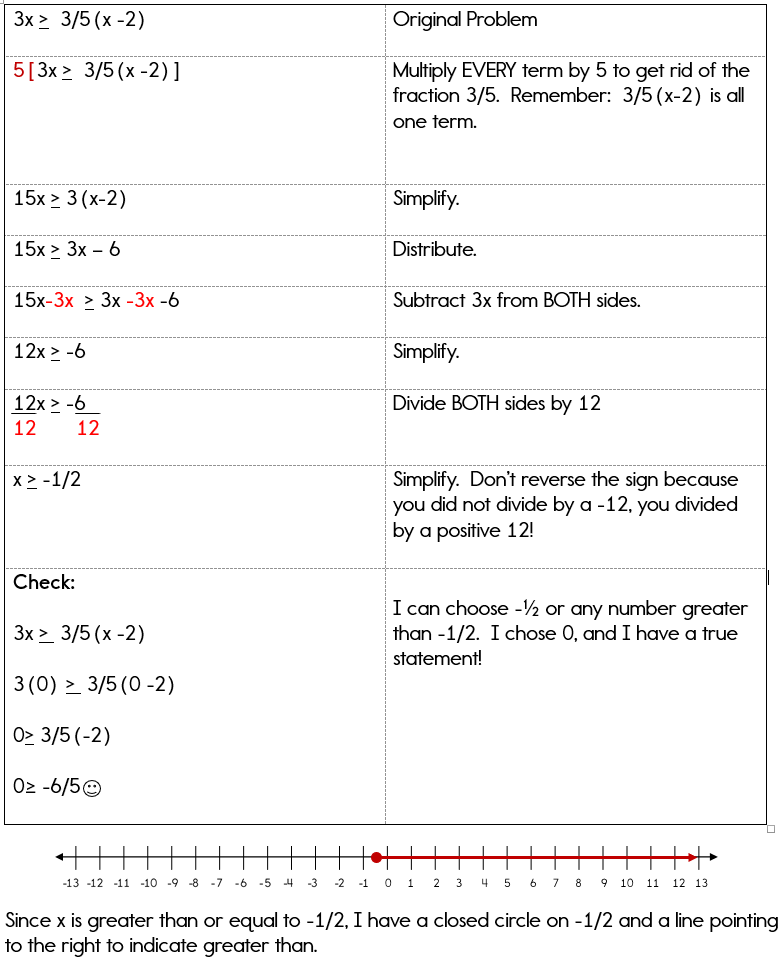 Now are you ready for a few on your own?